FIU awarded for AMLIGHT to provide an Advanced International Network for the Large Synoptic Survey Telescope (LSST) through 2031. 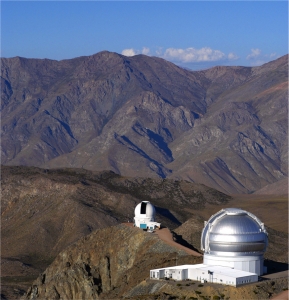 Miami, Florida, November 12, 2014 –Florida International University’s Center for Internet Augmented Research and Assessment (CIARA) is pleased to announce AMLIGHT’s long-term support for a high-speed network, linking the NSF-funded Large Synoptic Survey Telescope (LSST) to the National Center for SuperComputing Applications (NCSA) and beyond through a sub-award from the Association of Universities for Research in Astronomy (AURA). This unprecedented long-term infrastructure will provide committed bandwidth capacity for LSST’s explicit needs, and communal bursts within the AMLIGHT collaboration.The network architecture is a critical component of the design of LSST.  AMLIGHT has contributed to the design of the network architecture for LSST, and supported the evolution of the regional network infrastructure since site planning in 2006. The network architecture allows for a design of LSST utilizing the computational resources of NCSA in Illinois to process in near real time the data from the telescope in Northern Chile.The AMLIGHT collaboration will deploy multiple 100G links from Miami, to Fortaleza, Brazil, to São Paulo, and to Santiago, Chile, to provide the underlying infrastructure to support LSST’s committed bandwidth, and burst needs. Partners in the U.S. that interconnect with AMLIGHT and will help transport LSST’s data to NCSA include Florida LambdaRail, Internet2, and ESnet.This commitment to international network-enabled major research instruments creates an exciting new frontier for U.S. and collaborative science. The LSST will be able to look throughout the Universe, and within seconds, relying on AMLIGHT, deliver images of distant stars and galaxies to NCSA, where they are processed and made ready for science.LSST’s construction funding will be provided through NSF’s Major Research Equipment and Facilities (MREFC) account. LSST passed its NSF Final Design Review in December of 2013; the National Science Board gave the NSF conditional approval to move the project to construction status in May of 2014. NSF issued a new CSA for LSST Construction to AURA in August of 2014 initiating the formal NSF LSST Construction Project. On the DOE side, LSST received Critical Decision-1 approval (CD-1) in 2011 and also just received CD-3a approval, which allows the project to move forward with the sensor long-lead procurements. The CD-2 review will take place the first week in November, with approval expected shortly afterward, formally fixing the baseline budget for completion of the camera project. The Particle Physics Project Prioritization Panel (P5), an advisory subpanel of the High Energy Physics Advisory Panel (HEPAP), recommended in May of 2014 that DOE move forward with LSST under all budget scenarios, even the most pessimistic.

About CIARA: Florida International University’s Center for Internet Augmented Research and Assessment (CIARA) within the Division of IT has developed an international, high-performance research connection point in Miami, Florida, called AMPATH (AMericasPATH; www.ampath.net). AMPATH extends participation to underrepresented groups in Latin America and the Caribbean, in science and engineering research and education through the use of high-performance network connections.

About AMLIGHT: Americas Lightpaths (AMLIGHT) operates high-performance network links connecting Latin America to the U.S., funded by the National Science Foundation (NSF), award #ACI-0963053; the Brazilian Education and Research Network – RNP (under a network management contract to the Brazilian Ministry of Science, Technology and Innovation – MCTI); and the Academic Network of Sao Paulo – ANSP (FAPESP award #2003/13708-0). AMLIGHT aims to enhance science research and education in the Americas by interconnecting key points of aggregation, providing operation of production infrastructure, engaging U.S. and western hemisphere science and engineering research and education communities, creating an open instrument for collaboration, and maximizing benefits of all investors.

The Association of Universities for Research in Astronomy (AURA) is a consortium of 39 US institutions and 6 international affiliates that operates world-class astronomical observatories. AURA’s role is to establish, nurture, and promote public observatories and facilities that advance innovative astronomical research. In addition, AURA is deeply committed to public and educational outreach, and to diversity throughout the astronomical and scientific workforce. AURA carries out its role through its astronomical facilities: http://www.aura-astronomy.org

LSST project activities are supported through a partnership between the National Science Foundation (NSF) and the Department of Energy. NSF supports LSST through a Cooperative Agreement managed by the Association of Universities for Research in Astronomy (AURA). The Department of Energy funded effort is managed by the SLAC National Accelerator Laboratory (SLAC). Additional LSST funding comes from private donations, grants to universities, and in-kind support from Institutional Members of LSSTC. Learn more at lsst.org.