Big data science in South America and Sub-Saharan Africa will be dramatically evolving over the next five years, with increasing dependency on advanced cyberinfrastructure and programmable networking. Significant projects include the Vera Rubin Observatory in Chile, Brazilian participation in the High Luminosity Large Hadron Collider experiments at CERN, and the Square Kilometer Array in South Africa.

“This is great news for the development of astronomy in Chile, especially with the construction and soon commissioning of the Rubin telescope, which will have the largest digital camera in the world. The advanced cyberinfrastructure delivered by the Americas-Africa Lightpaths Express and Protect network will be a key element to continue developing first-class science and to be able to share these discoveries with local communities through our education and outreach programs,” said Mario Hamuy, AURA Vice President and Head of Mission, Chile. 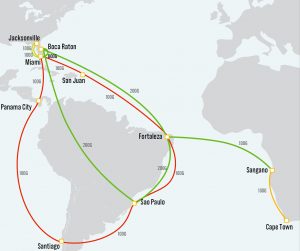 “The Brazilian Education and Research Network, RNP, has collaborated very closely with FIU/CIARA since their first IRNC award in 2005, in improving the quality and robustness of the international connections between the USA, South America and, most recently, Africa. Thus, we celebrate the new award extending this collaboration for a further 5 years. We are pleased to bring together researchers and students between the Americas and Africa. This is a milestone for RNP. Our partnerships and the support of NSF and MCTI have opened direct South-South links of great capacity that will boost education, science and also reinforce the remarkable cooperation among Portuguese-speaking communities on both continents”, said Nelson Simoes, RNP Director.

AmLight-ExP is a reliable, resilient, leading-edge software-defined network infrastructure for research and education. In the map, the Express network consists of the green paths; the Protect network consists of the red paths. With significant and critical investments from the Academic Network of São Paulo (ANSP); Brazil’s Research and Education (R&E) network (RNP); the Association of Universities for Research in Astronomy (AURA); the regional network of Latin America (RedCLARA); and the national R&E network of S. Africa (TENET/SANReN), the total bandwidth provided by AmLight ExP between the U.S., South America, and Africa is expected to grow to over 4 Terabits per second in aggregate capacity by 2025. Duncan Greaves, CEO of TENET said, “We congratulate FIU/CIARA on securing this award and we’re delighted to see AmLight-ExP advancing. Important research endeavors in South Africa and Africa more generally will benefit notably, as will international research co-operation among the Americas and Africa.”

This flexible inter-regional infrastructure enables science communities to expand research and learning activities, empowered through access to scalable optical spectrum on submarine cables and programmable networks. “The Academic Network of Sao Paulo provides connectivity to more than 50 institutions, which are responsible for more than 40 percent of Brazilian science production. This new award by the NSF to FIU is a major milestone for the AmLight-ExP project, underpinned by our partnership with FIU, RNP, and AmLight consortium partners for 15+ years”, said Joao Eduardo Ferreira, Principal Investigator of ANSP.

“The approval of this new funding agreement awarded to the Florida International University’s Center for Internet Augmented Research and Assessment (CIARA) is excellent news for the scientific community in Latin America and Africa. The improved connectivity in the following years will help us strengthen the cooperation between our continents and provide additional capacity to the already in place link with Africa,” said Luis Eliecer Cadenas, RedCLARA Executive Director.

FIU’s AmLight-ExP project aims to increase the rate of discovery. Faster discovery means quicker focus on the greatest benefit for society. AmLight-ExP is a catalyst for new communities of researchers and learners with a bridge, linking U.S., Latin American and African students, teachers and researchers. AmLight-ExP is committed to serving the needs of graduate and undergraduate education through models that bring together students and the networking community with scientists from all domains.

“The increased capacity that the AmLight-Exp project will unlock between Africa and Latin America will not only significantly improve research collaboration between the two regions, but it will also provide the Americas with unparalleled access to African hosted science initiatives (such as the South African hosted SKA1-mid telescope and its precursor, the MeerKAT telescope) and vice versa. I believe tertiary education will also benefit from this initiative as it will assist in breaking down the barriers that hamper students on both continents from gaining crucial hands-on experience using NREN connected research infrastructures” stated Leon Staphorst, Director of SANReN.

“The awarding of this grant comes at the right moment when UbuntuNet Alliance recently signed a Memorandum of Understanding with RedCLARA and is Co-PI in the Network for European, American, African, and Arctic Research (NEAAAR) project. Our involvement in the Americas-Africa Lightpaths Express and Protect (AmLight-ExP) puts us in a core position to enhance our collaboration with global research and education networking players as this complements the existing partnerships with our sister organizations in Africa and with GEANT in Europe. The awarding of this grant draws us closer to our objective of being integrated in the global research and education network and that of providing state-of-the-art Internet connectivity and infrastructure that give our researchers and students a gateway to the global research and education network”, said Matthews Mtumbuka, Chief Executive Officer of UbuntuNet Alliance.

About FIU: Florida International University is an urban, multi-campus, public research university serving its students and the diverse population of South Florida. FIU is committed to high-quality teaching, state-of-the-art research and creative activity, and collaborative engagement with its local and global communities. Fostering a greater international understanding, FIU is a major international education center with a primary emphasis on creating greater mutual understanding among the Americas and throughout the world. FIU is Miami’s first and only public research university, offering bachelor’s, master’s, and doctoral degrees. Designated as a top-tier research institution, FIU emphasizes research as a major component in the university’s mission. (http://www.fiu.edu)

About ANSP: The ANSP project (an Academic Network at São Paulo), as determined by a decision of FAPESP’s Board of Trustees, “provides the State of São Paulo research community with state-of-the-art computer networking connectivity.” ANSP develops and maintains the infrastructure, Internet services and data communication in general which, in conjunction with ANSP’s Technical Reserve Program, offers the education and research community in the State of São Paulo the technological means needed to access information throughout the world, to share knowledge, to develop collaborative projects and for innovation on a large scale. The ANSP Project is run by NARA from The Medical School of the University of São Paulo and is funded by FAPESP. (www.ansp.br)

About AURA: The Association of Universities for Research in Astronomy (AURA) is a consortium of 40 US institutions and 4 international affiliates that operates world-class astronomical observatories. AURA’s role is to establish, nurture, and promote public observatories and facilities that advance innovative astronomical research. In addition, AURA is deeply committed to public and educational outreach, and to diversity throughout the astronomical and scientific workforce. AURA carries out its role through its astronomical facilities. (www.aura-astronomy.org)

About AMPATH: Florida International University’s Center for Internet Augmented Research and Assessment (CIARA), in the Division of IT, has developed an international, high-performance research connection point in Miami, Florida, called AMPATH (AMericasPATH; www.ampath.net). AMPATH extends participation to underrepresented groups in Latin America and the Caribbean, in science and engineering research and education through the use of high-performance network connections. AMPATH is in part funded by the National Science Foundation (NSF), award #OAC-1451018; and the AtlanticWave-SDX: NSF Award# OAC- 1451024, 2015-2020, IRNC: RXP: AtlanticWave-Software Defined Exchange: A Distributed Intercontinental Experimental Software Defined Exchange (SDX). (www.ciara.fiu.edu)

About RNP: The Brazilian Education and Research Network (RNP), qualified as a Social Organization (OS) by the Brazilian government, is supervised by the Ministry of Science, Technology and Innovations (MCTI), and is maintained through the Inter-Ministry RNP program, which also includes the Ministries of Education (MEC), Health (MS),  Citizenship and Defense (MD). The first Internet provider in Brazil with national coverage, RNP operates a high-performance nationwide network, with points of presence in all 26 states and the national capital, providing service to over 1200 distinct locations. RNP’s more than four million users are making use of an advanced network infrastructure for communication, computation and experimentation, which contributes to the integration of the national systems of Science, Technology and Innovation, Higher Education, Health and Culture. (http://www.rnp.br/en)

About WACREN: West and Central African Research and Education Network (WACREN) is a regional research and education network serving the west and central region of Africa. The WACREN’s mission is to build and operate a world class network infrastructure, develop state of the art services, promote collaboration among national, regional, international research and education communities and build the capacity of the REN community. (https://www.wacren.net/)