The Americas Africa Research and eduCation Lightpaths (AARCLight) project (NSF OAC-1638990) provided support for a grant to plan, design, and define a strategy for high-capacity research and education network connectivity between the U.S., Brazil, and West, Central and Southern Africa. The study indicated a high level of enthusiasm to engage in collaborative research among the U.S., Brazil and the African communities. 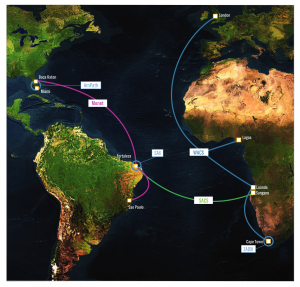 “AARCLight and AmLight-SACS have succeeded due to strong and consistent collaboration between the partners. Linking the U.S., Brazil and the nations of Africa to support robust research and education networking using a novel South Atlantic route is the culmination of 3 years of careful planning and execution. Enhancing the technological and social connections in many science disciplines including astronomy, biodiversity and genomics are anticipated to accelerate the rate of discovery while providing a diverse networking path for all collaborators”, said Heidi Morgan, Co-Principal Investigator and lead for the AmLight-SACS project.

The SACS cable system between Fortaleza, Brazil, and Sangano, Angola, is the first modern east-west subsea cable in the South Atlantic. The activation of the AmLight-SACS path adds redundancy and resiliency to the global R&E network fabric by providing a transatlantic route across the South Atlantic, shortening paths from the Southern Hemisphere countries to Africa and Europe. The newly established connection provides a baseline for planning the next generation of collaborations involving major scientific instruments, safe in the understanding that there will be efficient, available, and unmediated connectivity and capacity between the continents.

To evaluate the connectivity, two 100G nodes at AMPATH were configured to generate packets that flowed from Miami, Florida to TENET/SANReN’s router at ZAOXI in Cape Town and back to Miami. The figure below shows the network utilization at 99Gbps for a period of one hour.

“The AmLight-SACS project exemplifies FIU’s Worlds Ahead mission as an international leader in Research & Education Networking to advance scholarship through high-quality teaching, state-of-the-art research and creative activity, and collaborative engagement with its local and global communities.  FIU is strengthening its ties and expanding its research around the world with our South American and African collaborators! All of this is possible because of the dedication this international project team has put into the first ever South Atlantic R&E network crossing between three continents” said Julio Ibarra, Principal Investigator of AmLight.

“TENET is honoured to have been part of this project and we are delighted that it is coming to fruition. Entire ranges of research problems will in the future depend for their resolution upon multi-partner, multi-continent collaborations such as this. We are especially pleased that African researchers stand to gain substantial benefits from the project” said Duncan Greaves, CEO of the Tertiary Education and Research Network of South Africa (TENET).

“We, at UbuntuNet Alliance, are excited to witness this major milestone of the AARCLight and AmLight-SACS Project which promises to resolve most of our major digital challenges facing our research and education communities in Africa. Cost, speed and access have been a major challenge in relation to satisfying the connectivity needs of our research and education communities and this project is well positioned to help solve these challenges in addition to opening wide opportunities for research collaboration and knowledge sharing between the three continents”, said Matthews Mtumbuka, CEO of UbuntuNet Alliance.

“In the 30 years since its launch as an academic network project, RNP has always supported international collaboration with similar initiatives around the world. The recent availability of the high capacity SACS link from Fortaleza to Angola has at last provided us with a direct physical connection to Africa which will complement our existing major links to the US and Europe. The new South America eXchange in Fortaleza will bring together RNP, RedClara and many other global research and education networks. These significantly lower latency routes to Africa will support much closer Americas engagement in education, research, development and cultural activities with African partners”, said Nelson Simões, CEO of the Brazilian Education and Research Network (RNP).

“The in-service of SACS between Brazil and Angola opens new opportunities for collaboration between research and education communities in Africa, Latin America and the US, with much less latencies than on previous routes. Moreover, it provides the opportunity to move on with the planned establishment of a Global Exchange Point in Lagos, using the SACS and WACS submarine cable systems”, said Boubakar Barry, CEO of West and Central African Research and Education Network (WACREN).

About Angola Cables: Angola Cables is an IT Solutions multinational focused on selling data infrastructure solutions, connectivity and cloud services for IP’s and ISP’s requiring digital connections and services in the corporate sector. The company currently operates the SACS, Monet and WACS cable systems and manages two data centers – AngoNAP Fortaleza in Brazil and AngoNAP Luanda in Angola. It also manages Angonix, one of Africa’s top five Internet Exchange Points. With its robust network, Angola Cables directly connects Africa, Europe and the Americas with established partnerships to connect to Asia (https://www.angolacables.co.ao/en/).

About FIU: Florida International University is an urban, multi-campus, public research university serving its students and the diverse population of South Florida. FIU is committed to high-quality teaching, state-of-the-art research and creative activity, and collaborative engagement with its local and global communities. Fostering a greater international understanding, FIU is a major international education center with a primary emphasis on creating greater mutual understanding among the Americas and throughout the world. FIU is Miami’s first and only public research university, offering bachelor’s, master’s, and doctoral degrees. Designated as a top-tier research institution, FIU emphasizes research as a major component in the university’s mission (http://www.fiu.edu).

About RNP: The Brazilian Education and Research Network (RNP), qualified as a Social Organization (OS) by the Brazilian government, is supervised by the Ministry of Science, Technology, Innovation and Communications (MCTIC), and is maintained through the Inter-Ministry RNP program, which also includes the Ministries of Education (MEC), Health (MS),  Citizenship and Defense (MD). The first Internet provider in Brazil with national coverage, RNP operates a high-performance nationwide network, with points of presence in all 26 states and the national capital, providing service to over 1200 distinct locations. RNP’s more than four million users are making use of an advanced network infrastructure for communication, computation and experimentation, which contributes to the integration of the national systems of Science, Technology and Innovation, Higher Education, Health and Culture (http://www.rnp.br/en).

About ANSP: The Academic Network of São Paulo (ANSP) provides connectivity to the top R&E institutions, facilities, and researchers in the State of São Paulo, Brazil, including the University of São Paulo, the largest research university in South America. ANSP directly connects to AMPATH in Miami. ANSP also provides connectivity to a number of special infrastructure projects like GridUNESP, one of the largest computational clusters in Latin America, supporting interdisciplinary grid-based science (www.ansp.br/index.php/us/ ).

About TENET/SANReN: The Tertiary Education and Research Network of South Africa (TENET), and the South African National Research Network (SANReN) jointly form South Africa’s NREN. TENET (https://www.tenet.ac.za) is the operator of the network that is deployed jointly by the two organizations. SANReN is a component of the National Integrated Cyberinfrastructure System (NICIS), located in the CSIR,  and is responsible for the design, acquisition and roll-out of national and international capacity for the South Africa NREN, as well as the development and incubation of advanced services (https://www.sanren.ac.za/). The NICIS also includes the Centre for High Performance Computing (CHPC)  and the Data Intensive Research Initiative of South Africa (DIRISA).

About WACREN: West and Central African Research and Education Network (WACREN) is a regional research and education network serving the west and central region of Africa. The WACREN’s mission is to build and operate a world class network infrastructure, develop state of the art services, promote collaboration among national, regional, international research and education communities and build the capacity of the REN community. (https://www.wacren.net/)