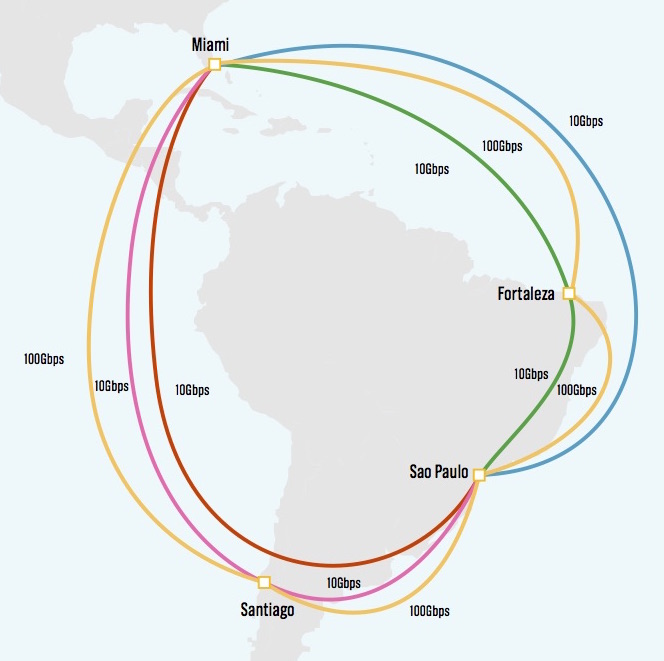 Dr. Julio Ibarra, Assistant Vice President of Technology Augmented Research at FIU, said “Santiago, Chile and Fortaleza, Brazil are strategic locations geographically in the southern hemisphere. By adding Santiago and Fortaleza to the AmLight-ExP 100G ring, the collaborative research and education activities between the U.S. and the nations in South America can rely on a more resilient and higher throughput network infrastructure.”

Dr. Chris Smith, Head of Mission AURA Observatory in Chile said “This network represents a fundamental strategic investment by the NSF in the advancement of science internationally. While it is mission critical for NSF’s newest flagship astronomical facility, the Large Synoptic Survey Telescope (LSST), under construction by AURA in Chile and the USA, it also enhances the operational capabilities of all of the astronomical facilities in Chile, including the existing NSF facilities of NOAO, Gemini, and ALMA as well as the many smaller university-led projects that are located in northern Chile to take advantage of the excellent observational conditions there.”

Jeffrey Kantor, of the LSST Project Management Office, said, “This development will enable LSST to realize a reliable, high-speed network connecting LSST sites in Chile and the United States. This network will permit LSST data to travel in seconds to our LSST Data Facility at the University of Illinois National Center for Supercomputing Applications (NCSA) where it is processed into real-time alerts of transient events and annual data releases ultimately containing billions of galaxies and stars.”

“The new 100G AmLight-ExP links form a ring Miami-Fortaleza-São Paulo-Santiago-Miami, by making this capacity also available in Santiago and Fortaleza. This ring will soon be connected in Fortaleza, to the future 100G cables Ellalink (from Portugal) and SACS (from Angola), forming what is to be called the South Atlantic Crossroads (SAX)”, said Dr. Michael Stanton, Director of Research and Development at Brazil’s National Research and Education Network, RNP.

Eduardo Grizendi, Director of Engineering & Operation at Brazil’s National Research and Education Network, RNP, said “With these activations, we are completing a network infrastructure of excellence for the next years, of 100G high capacity, robust and redundant, to support international academic collaboration, especially between the Americas.”

“Reliable high bandwidth connectivity has been always a challenge in a continental country like Brazil, plenty of rainforests and economic difficulties. This great work of RNP with Brazillian electricity companies, will allow us to extend a 100G backbone from the extreme northern rainforest to the southern planes. This first inauguration shows it is indeed possible at a payable price and that RNP can and is doing it. No need to say how important this is to the national and international scientific collaboration in the American continent”, said Dr. Luis Lopez, Principal Investigator (PI) of ANSP.

About CIARA: Florida International University’s Center for Internet Augmented Research and Assessment (CIARA), in the Division of IT, has developed an international, high-performance research connection point in Miami, Florida, called AMPATH (AMericasPATH; www.ampath.net). AMPATH extends participation to underrepresented groups in Latin America and the Caribbean, in science and engineering research and education through the use of high-performance network connections. AMPATH is home to the Americas Lightpaths (AmLight) high-performance network links connecting Latin America to the U.S., funded by the National Science Foundation (NSF), award #ACI-0963053 and the Academic Network of São Paulo (award #2003/13708-0). (http://ciara.fiu.edu/)

About ANSP: The Academic Network of São Paulo (ANSP) provides connectivity to the top R&E institutions, facilities and researchers in the State of São Paulo, Brazil, including the University of São Paulo, the largest research university in South America. ANSP directly connects to AmLight in Miami at 20G. ANSP also provides connectivity to Kyatera, a 9-city dark-fiber-based optical network infrastructure linking 20 research institutions in the state and a number of special infrastructure projects like GridUNESP, one of the largest computational clusters in Latin America, supporting interdisciplinary grid-based science. (www.ansp.br)

About AURA: The Association of Universities for Research in Astronomy (AURA) is a consortium of 40 US institutions and 4 international affiliates that operates world-class astronomical observatories. AURA’s role is to establish, nurture, and promote public observatories and facilities that advance innovative astronomical research. In addition, AURA is deeply committed to public and educational outreach, and to diversity throughout the astronomical and scientific workforce. AURA carries out its role through its astronomical facilities. (www.aura-astronomy.org)

About LSST: Financial support for LSST comes from the National Science Foundation (NSF) through Cooperative Agreement No. 1258333, the Department of Energy (DOE) Office of Science under Contract No. DE-AC02-76SF00515, and private funding raised by the LSST Corporation. The NSF-funded LSST Project Office for construction was established as an operating center under management of the Association of Universities for Research in Astronomy (AURA).  The DOE-funded effort to build the LSST camera is managed by the SLAC National Accelerator Laboratory (SLAC).  (www.lsst.org).

About REUNA (Chile): Red Universitaria Nacional, REUNA, provides a leading digital platform that articulates, connects, and fosters collaboration between those entities that based in Chile belong to the fields of science, education, and the Chilean local culture, connecting them to the rest of the world throughout innovating services. With over 20 years’ experience and currently made up of 31 institutions, REUNA’s digital platform covers 13 regions between the northern city of Arica and the southern city of Osorno. (www.reuna.cl/en/)

About RNP: The Brazilian Education and Research Network (RNP), qualified as a Social Organization (OS) by the Brazilian government, is supervised by the Ministry of Science, Technology and Innovation (MCTI), and is maintained through the inter-ministerial RNP program, which also includes the Ministries of Education (MEC), Health (MS) and Culture (MinC). The first Internet provider in Brazil with national coverage, RNP operates a high-performance nationwide network, with points of presence in all 26 states and the national capital, providing service to over 1200 distinct locations. RNP’s more than four million users are making use of an advanced network infrastructure for communication, computation and experimentation, which contributes to the integration of the national systems of Science, Technology and Innovation, of Higher Education, of Health and of Culture. (www.rnp.br/en)