Miami, Florida, September 29th, 2016 – During the 2016 Global Lambda Integrated Facility meeting, co-located with the 2016 Internet2 Technology Exchange, in Miami, the Georgia Institute of Technology (Georgia Tech) and Florida International University (FIU) demonstrated the first version of the AtlanticWave-Software Defined Exchange (SDX) distributed network controller. Conference participants had the opportunity to interact with the development team, provide feedback and establish new partnerships. The lead software developer, Sean Donovan, presented the challenges of developing an SDX controller to domain scientists and network engineers. These challenges range from identifying switches that support 100GE and OpenFlow 1.3, to interpreting the language of network to domain scientists that may not be familiar with it, to allow network control Application Programming Interface (API) development possible. 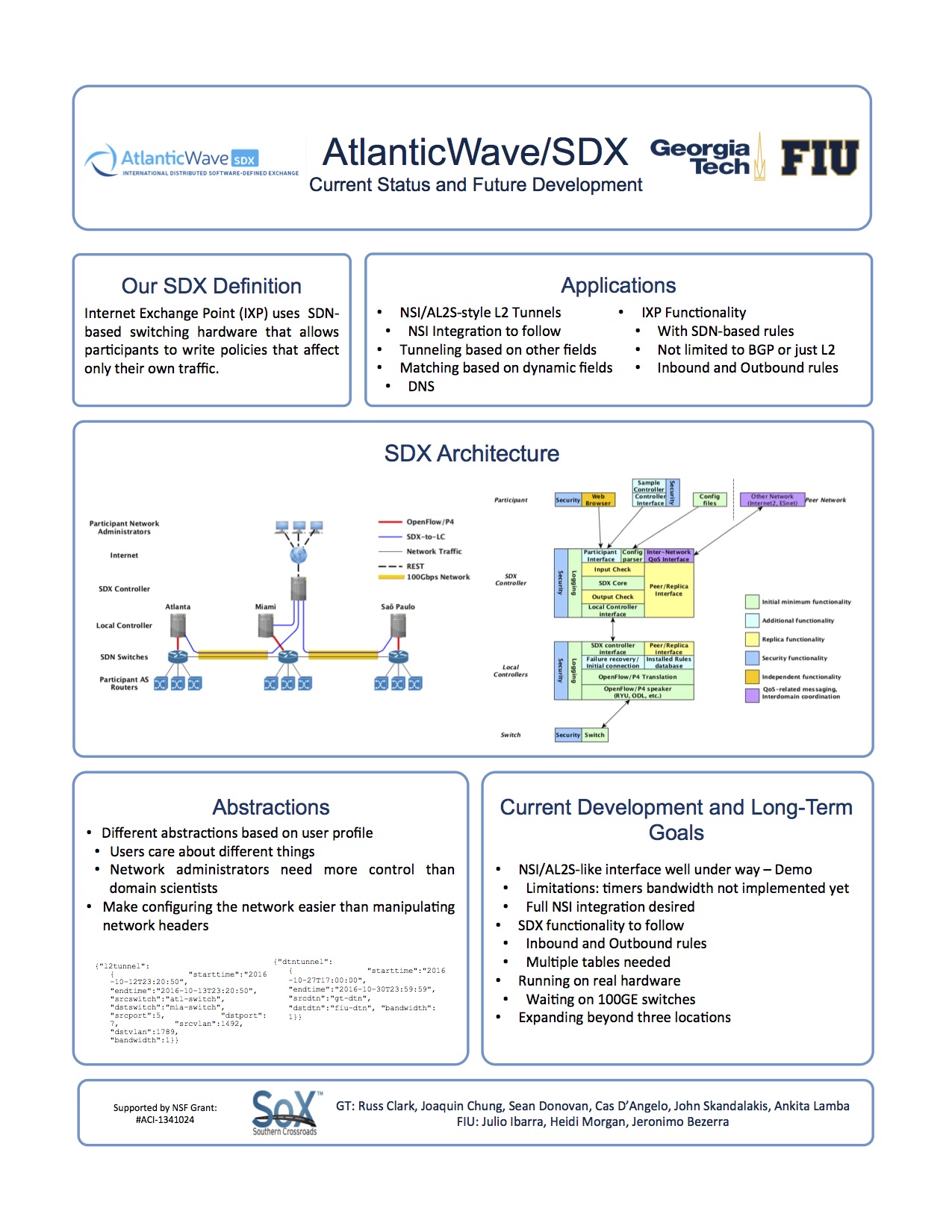 The AtlanticWave-SDX controller under development will support research, experimental deployments, prototyping and interoperability testing, on national and international scales. During the demonstration, the SDX controller source code was made available [1], and an updated demonstration is planned for the Supercomputing 2016, from November 14-17th, in Salt Lake City, Utah. Russ Clark, Senior Research Scientist at Georgia Tech, also announced that the first prototype would be released before the end of 2016 and production deployments will start early next year, involving three Academic Open Exchange Points: Southern Crossroads (SoX) in Atlanta, AMPATH in Miami and SouthernLight (SoL) in Sao Paulo/Brazil, using the AmLight Software Defined Network (SDN). During the Internet2 Technology Exchange, Julio Ibarra, PI of the AtlanticWave-SDX (NSF Award ACI#1451024) and AmLight-ExP (NSF Award#ACI-1451018) projects, said, “The AmLight SDN network is being expanded to support the SDX controller in parallel with other academic applications.”

About Florida International University: Florida International University is a vibrant, student-centered public research university, ideally located in Miami, that is worlds ahead in its commitment to learning, research, entrepreneurship, innovation, and creativity so that our graduates are prepared to succeed in a global market (http://www.fiu.edu).

About CIARA and AMPATH: Florida International University’s Center for Internet Augmented Research and Assessment (CIARA), in the Division of IT, has developed an international, high-performance research connection point in Miami, Florida, called AMPATH (AMericasPATH; www.ampath.net). AMPATH extends participation to underrepresented groups in Latin America and the Caribbean, in science and engineering research and education through the use of high-performance network connections. AMPATH is home to the Americas Lightpaths (AmLight) high-performance network links connecting Latin America to the U.S., funded by the National Science Foundation (NSF), award #ACI-0963053 and the Academic Network of São Paulo (award #2003/13708-0)(http://www.ciara.fiu.edu).

About Georgia Institute of Technology: Georgia Institute of Technology, also known as Georgia Tech, is one of the nation’s leading research universities, providing a focused, technologically based education to more than 21,500 undergraduate and graduate students. Georgia Tech has many nationally recognized programs, all top-ranked by peers and publications alike, and is ranked in the nation’s top 10 public universities by U.S. News and World Report. It offers degrees through the Colleges of Architecture, Computing, Engineering, Sciences, the Scheller College of Business, and the Ivan Allen College of Liberal Arts. As a leading technological university, Georgia Tech has more than 100 centers focused on interdisciplinary research that consistently contribute vital research and innovation to American government, industry, and business. (www.gatech.edu).

About SouthernLight (SoL): SouthernLight is the GOLE (GLIF Open Lightpath Exchange) in São Paulo, Brazil, collaboration between ANSP and RNP, and is responsible for providing end-to-end circuits between Brazilian scientific institutions and their international collaborators.

About Princeton University: Princeton is an independent, coeducational, nondenominational institution that provides undergraduate and graduate instruction in the humanities, social sciences, natural sciences and engineering. As a world-renowned research university, Princeton seeks to achieve the highest levels of distinction in the discovery and transmission of knowledge and understanding. At the same time, Princeton is distinctive among research universities in its commitment to undergraduate teaching (www.princeton.edu).

About RNP: The Brazilian Education and Research Network (RNP), qualified as a Social Organization (OS) by the Brazilian government, is supervised by the Ministry of Science, Technology and Innovation (MCTI), and is maintained through the inter-ministerial RNP program, which also includes the Ministries of Education (MEC), Health (MS) and Culture (MinC). The first Internet provider in Brazil with national coverage, RNP operates a high-performance nationwide network, with points of presence in all 26 states and the national capital, providing service to over 1200 distinct locations. RNP’s more than four million users are making use of an advanced network infrastructure for communication, computation and experimentation, which contributes to the integration of the national systems of Science, Technology and Innovation, of Higher Education, of Health and of Culture (www.rnp.br/en)

About ANSP: The Academic Network of São Paulo (ANSP) provides connectivity to the top R&E institutions, facilities and researchers in the State of São Paulo, Brazil, including the University of São Paulo, the largest research university in South America. ANSP directly connects to AmLight in Miami at 20G. ANSP also provides connectivity to Kyatera, a 9-city dark-fiber-based optical network infrastructure linking 20 research institutions in the state and a number of special infrastructure projects like GridUNESP, one of the largest computational clusters in Latin America, supporting interdisciplinary grid-based science (www.ansp.br).